What are the 3 best steps to increase your self awareness? Read on to find out.

One of the qualities of people that inspire is that they are being unutterably and inexorably themselves.

What makes someone authentic? Charismatic? Trustworthy? We think it’s the degree to which you hold dear that very courageous dialogue between all your imperfections, the things you suck at, the things you’re ashamed of as well as the universe and the world you are living in. So, is that something that can be learned? We think it is and today we are sharing a model which we believe captures the essence of this process and that’s:

The Johari Window was developed in 1955. The name came about by merging the names of its founders – John Luft and Harry Ingram. It consists of four panes, which are arranged in a two-by-two matrix. You have a couple of axes: one being stuff that you know and stuff that you don’t know as well as stuff that’s perceived by you and by others. By combining them, you end up with four areas. 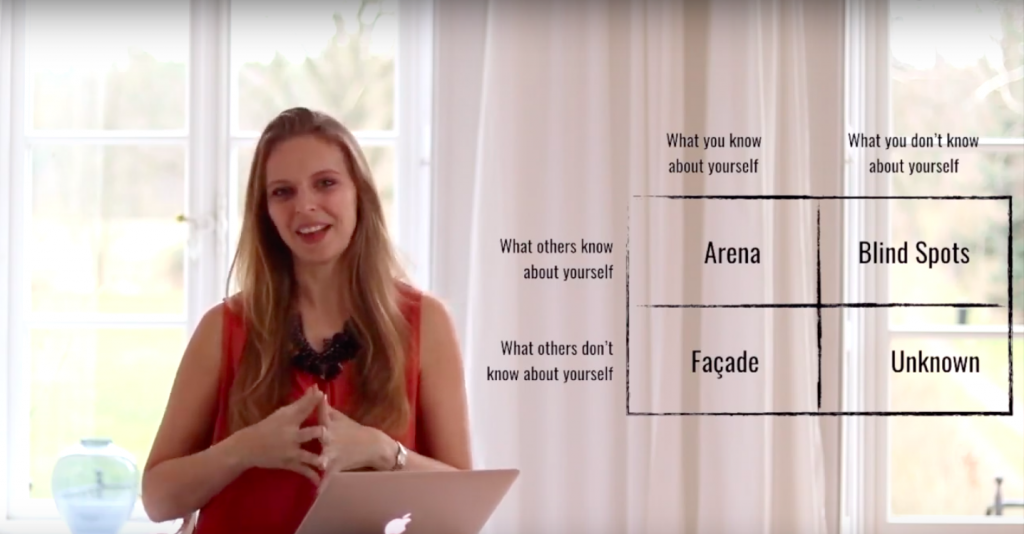 One is the public area, we call that your Arena. It’s the stuff that you are open about and that others also know about you.

Then there are your Blind Spots – the things that others see in you but you don’t.

There’s also an area called your Façade – your hidden parts. They are the things that you are trying to not let surface.

And then there’s this mysterious last area – the Unknown, the stuff that is neither known to you nor to others.

How to use this model?

In corporate settings this model is oftentimes used to evaluate yourself or for trust exercises because it is assumed that the bigger your public pane – your Arena, so to say – the more trustworthy and the more authentic you are. The assumption is that someone who has a high level of self-awareness, will have a large Arena because that person knows who they are, they know what they’re good at and they know why they’re doing what they’re doing. Think about it, it is so hard to actually give permission for ourselves to be that person that we truly are because we are so fearful that whatever we are ashamed of is going to surface: our own darkness, our own desperation, our irrational fears, our unjustified anger. When you lose that shame and find the strength to truly listen to what the universe and others are actually mirroring to us, that’s when you have a really really big public pane, or Arena, as we like to say. It will give you a higher sense of resilience, you will be less apt to feel terrible after criticism, be so much more stable and generally have a bigger comfort zone.

Just a little question, or a big question maybe, for you out there: one thing I love to say at The Arc is that:

We have to say ‘yes’ to our inner f***** up rollercoaster, if we want to experience truth at the cliff edge of life.

And I’m curious what your stories are about this? What’s the rollercoaster emotion or a terrible thing you have said ‘yes’ to and, as a result of that, really tasted something that is different and so much more amazing? I’m asking this because we’ve made the experience that if someone shares a story, there’s going to be one more person who really resonates with it. I’m very curious to read from you and to hear what insights you’ve had on your journey.

What if you have a small Arena?

Ok, but let’s get back into the topic because this model would also assume that someone with a very small Arena would struggle so much more to define who they are, why they’re doing what they’re doing, what their talents are, and so on and so forth. This makes the process of moving out of your comfort zone so much scarier, if you don’t know how you will react, what’s going to come, and also you’ll be spending so much more energy on trying to hide something that you’re ashamed of, that you don’t want other people to know about you. You are gonna live a life where you have your guards up, where you’re going to be so much more defensive, where you’ll also probably have to numb yourself a lot and where you are gonna be reigned so much more by fear, and by shame, and, in worst case, gradually start to lose touch with yourself.

So, how do you prevent that from happening? Basically, the idea is you expand your Arena.

How to expand your Arena

Asking for authentic feedback could be the hardest thing in the world, not just for you but also for the person who is giving you the feedback, as that person obviously runs the risk of hurting or pissing you off, so one thing I really like to say when I do that personally is to honor that effort and to say something along the lines of, ‘it’s easy to share the shallow moments together, but it’s hard to really disclose yourself in a responsible manner and tell someone in the eye what you actually feel, even though it might be uncomfortable’. So that’s something that really worked for me. And if you’re still scared, you can always remind yourself that giving feedback might tell you something about the receiver but it definitely, most certainly, tells you something about the sender, and you can have a laugh together about it.

The second step to increasing your Arena is to disclose yourself and to really shrink your Façade. For some people this might be easier, for most people, according to my experience, it’s actually harder. I feel it’s harder because the degree to which we dislike or hate ourselves at times, just tends to exceed by far the degree to which others are disliking us.

A set of questions!

Because we know that this is a potentially tough process, we have actually prepared a set of questions for you, which you can do in a conversation with yourself as well as in a conversation with a partner or potentially even a group of friends, if you like. They are super deep, super heartfelt, very juicy as well. Do them at your own risk. We have included a couple of psychological disclaimers. If that’s something that you’re excited about, we will link the video once it’s uploaded, to get ready for you to get started.

And last but not least, discover the Unknown. What the Johari Window developers would tell us, is that as a result of deep and authentic feedbacking and self-disclosure, you’re creating a very powerful process of sharing, where you automatically also decrease the area of Unknown. It’s the area where you probably have to have a few lucky hits, and by lucky hits, I mean that I don’t have a very clear recipe on what questions you can ask, in which order, to get your desired breakthrough. However, I do feel that if you really try to make a good effort to listen, chances are – you are really going to be able to build some crazy new hypotheses about who you really are, what really wants and needs to surface and how you’re gonna pull all of this into the sunlight.

A free guide with all questions and instructions – ready to consume 😉

Now you know how to use the Johari Window as a tool for increased self-awareness. We understand it’s been quite some information, so, one more time, we have summarized all of this in a really cool guide, which we will link below. This guide not only contains a full description of the Johari Window but also the juicy and heartfelt questions, that you can use in a conversation with yourself as well as in a conversation with others, a feedback partner or maybe even a group of friends.

Most importantly, of course, if you had fun reading this blog but you’re feeling, ‘hey, I really wanna get started for real’, dare to contact us for a coffee chat, which are our 45 to 60 minutes free one-on-one coaching conversations, in which one of our Arc team members will sit down together with you and dig deep on how the heck you can use your talents, passions, and values to build something great and whether The Arc is the best partner for you to support personal growth:

Let’s get started with my free coaching from The Arc:

And if you really feel you know someone who would take value out of this, dare to share that video with them because hey, maybe that person contacts you back for a Johari Window conversation invitation! Have a beautiful rest of the day, and can’t wait to see you soon! Bye bye!

Book your free Coaching Coffee Chat, find out what really holds you back AND whether The Arc can support you in your mission.

Who do YOU dare to be?