Catarina Rodrigues, Portuguese and Alumna of The Arc Ghent 2016. She holds a Master’s in Chemical Engineering. She writes since she’s a kid. She’s now completing her second Master’s in (Computer Science and Telecommunications) while getting her first book published, having a day job in IT Consultancy, and being a soft skills trainer at different companies and NGOs.

Catarina is now collecting ideas for her second book on emotional intelligence, feminity and what it means to be a woman. We CAN’T WAIT. – Interview by ALIX RUFAS (The Netherlands, Alumna of The Arc Barxeta 2017).

Catarina fell in love. Deeply. And then had her heart broken. Badly.

The pain was so strong, she wasn’t sure she could handle it.

After much suffering, she decided that the only way to move forward was to face and voice her emotions. So in 2013, Catarina began writing letters to her ex-lover about each of the painful emotions this break-up made her go through. In the letters, she questioned his decisions, her thoughts, her feelings…

And then, after a while, in 2016, something magical happened: the writing fever began. 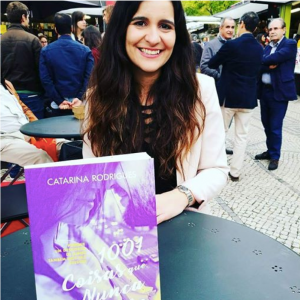 Every single day, for one year straight, Catarina wrote and wrote and wrote. She was completing her Master’s, but this didn’t stop her. She wrote during lunch breaks, she wrote while in public transport, she wrote at night until 3 AM…

“It was just necessary for me to heal and move on” she says. And at some point, exactly one year later, January 1st of 2017, she had written so much, it had materialized into her first book.

This marvel of a book is coming out in June of 2018. For now, it will only be available in Portuguese (Catarina’s mother tongue). But fear not, there’s plans to translate it into English soon.

The book is fiction but based on Catarina’s experiences. It’s about a woman who gets her heart broken and her journey in coping with her emotions. She deals with anger and disappointment. And she forgives him. In the process, she finds a way back to herself. She learns how to listen to her emotions. She also re-discovers her body as well as her essence as a woman.

“My book is not spiritual nor psychological. It’s about someone who’s brave enough to embrace love, fully, and the pain that comes with it”.

Today, Catarina is an incredibly vibrant and open-hearted person. I felt goose-bumps while interviewing her for this blog because of the power and strength radiating when she speaks.

I asked Catarina about specific tips she’d like to share with us on how to be more in tune with yourself and feel fully.

Write. Journal. Pay more attention to life in general. Do the little things you enjoy. Go to the beach. Go enjoy a good coffee. Dance to your favourite music. Pay attention to children smiling in the streets. Fight for your personal goals and dreams. Help others: it will make you understand you’re not the centre of the world and your problems will seem less dramatic. Be grateful and say thank you every day.

“The only way to understand life is to live. Go experience!” Says Catarina.

I also asked her about tips to connect with others on a deep and authentic level. Here’s her take:

Show you’re not perfect. Show who you are: don’t pretend to be someone you’re not .Understand that you have everything in you since you were born. Find a way to use your unique power. Be curious to know others.

“Love changes your life forever. Love is the answer. Love can destroy you and love can cure you. And everyone that happens in your life has a purpose.”

Book your free Coaching Coffee Chat, find out what really holds you back AND whether The Arc can support you in your mission.

Who do YOU dare to be?